If you’ve been paying some attention to the American comics industry the last twelve to eighteen months you would have noticed that Image Comics have had a huge impact on the market in terms of new ideas and new comics. Their biggest flagship is of course Kirkman’s long-running The Walking Dead, and the new-comer Saga is the next big thing. 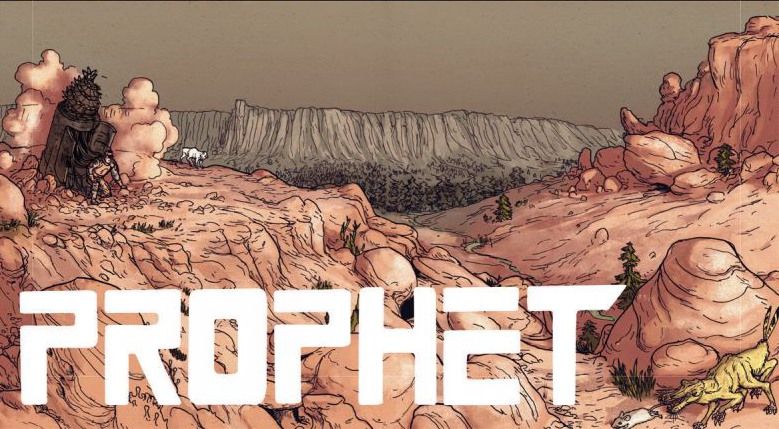 Another book that does well is the revival of an old comic called Prophet. “Rebooting” from issue #21, Brandon Graham and his team have made it a creative crazy sci-fi ride. I haven’t read the old Prophet, but from what I’ve seen, the revival is totally different in most of its elements.

Prophet is about John Prophet (or rather, all the John Prophets) – a clone who has awoken on a strange world long after the Earth Empire has fallen. Now he, or rather all of him, tries to find their way home to salvage what is left.

What I really like about Prophet is the sheer creative freedom and energy that Graham, Roy, Milonogiannis and Dalrymple bring to the table. They make up a strange world, then churn it even stranger. They create wild characters, aliens and monsters, then turn them even crazier. The scope of the story seems as vast as the creative fantasy and freedom Graham and the guys share. 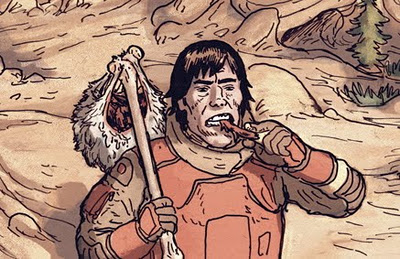 The way John and many of the characters are always eating, I find intruiging. Consuming and digesting food – or what they accept as food, be it worm slime, spuds from monsters or goo from puddles. A quirky nod to the usage of energy – and maybe a parallel to our real lives and how we waste food and energy, although it hasn’t really been paid off yet.

Another thing I like is the organic nature of the world they have create. There are surprisingly few machines for a sci-fi story – and most of the machines all seem to have an organic element. Although it’s nothing new, it does feel refreshing to not see androids and starships and metal when reading a sci-fi.

All this comes back to the creative freedom and, can we say, loose approach towards the world. It feels unpredictable, unplanned.

Which is also why I have trouble with Prophet.

This wildly imaginative world with fantastical planets, stranger-than-strange aliens and characters whose only humanoid aspect is that they can communicate with words, leaves very few emotional reference points for me.

The concept of waking thousand of years later, lightyears away from a home you barely remember, to go in search of the empire you once fought for, is, putting it light, not something a lot of us can relate to. Especially when John Prophet doesn’t have a clear family or love connection to his old empire, like a son, a wife or a lover. Because why would he, he’s a super clone warrior. He is akin to a medieval pulp hero.

So right off the bat, we start off with a pretty abstract psychological connection for his desire. But we are left with the intrigue of the many questions that the reader has regarding not just the protagonist, but the world itself. This intrigue, and the creative energy from Graham and the team, is what pushes me through the story.

Later we’ll learn that John has several allies (and several of himself) which he needs to find and, once again, team up with to salvage/save the Earth Empire. We’re presented with familiar concepts, that of friendship, loyalty and the possibility of betrayal. (We are now into vol 2 of Prophet, which is the latest collection released.)

Unfortunately, for me at least, Graham and the guys seem to rather stick with the abstract aspects and the wildly imaginary elements of the story, rather than establishing strong dramatic build-ups on the familiar concepts which I as a human being can clearly relate to.

This is mostly due to the indirect way of telling Prophet. Most of the comic is captions explaining the bare necessities – usually Prophet’s mind on display. So rather than showing us how one of his allies lost his brother, we are told. Rather than showing us how much Prophet loved a reptilian alien, we are told. This indirect approach to the action and events tends to remove the reader from the emotional core of the drama within each scene.

Another problem I have with Prophet is the lack of tough obstacles for our protagonist. There are plenty of obstacles, but none of them really take a toll on John Prophet. Combined with the abstract elements and indirect storytelling, the sense of drama is more a dream journey we’re floating through, rather than a character pushing against obstacles, desperate to reach his goal. I felt much the same with Jodorowsky’s The Metabarons and his Incal.

That said, with all the strangeness and wildly imaginary elements Graham, Roy, Dalrymple and Milonogiannis pull out of the space helmet, the exposition through the captions come in handy to explain the quirky elements of how the world, the ships, the aliens etc. work, operate and exist.

Still, emotionally, I feel disconnected to the story, to the characters. Which presents the horrible sentence “why should I care?” in my mind. A nemesis reaction in an audience/reader for a writer/storyteller.

This is the reason Saga – also a fantasy story set in space with all manners of quirky, strange concepts – is, in my opinion, a superior comic – not just to its sci-fi sibling Prophet, but to most other comics in the American market today. The reason is simple – familiar, relate-able concepts which are built upon with a strong dramatic sense, and a direct storytelling style with minimal exposition.

This might sound like I discourage you from picking up Prophet, but that’s not the case. The different ways of telling a story appeals to different readers and tastes. Prophet is wildly imaginative, and the creative flux these four artists seem to be riding on is a feast for not just the eye, but also the brain. Prophet is a progeny of Moebius, mixed with Easy Rider – in space.

So fans of quirky and abstract stories, and sci-fi in general, do hunt down Prophet, and while you’re at it, make sure you buy Saga at the same time.